A few weeks ago I read the chapter 4 of book “Introduction to Applied Linear Algebra”, Boyd and Vandenberghe (2018), called “Clustering” and I found it so clear and simple. Chapter 4 introduce the clustering concept only based on vectors and distance –subjects treated on chapters 1 and 3 respectively–through the canonical example of clustering models: k-means.

In this post I want to make a little review of the chapter and implement k-means on python.

The idea of clustering is to partition a set of vectors into \(K\) groups based on a distance measure. An intuitive way to think about it is thinking on a 2D-table where each observation (row) is a vector and we want to assign it to a cluster based on some similarity measure. So the goal is to add a new categorical variable (column) to the table with \(K\) possible group values.

To draw the concept and to use an example of the chapter, imagine that we are in a hospital and we have a table with measures of a feature vector for each patient. A clustering could help to separate patients and get insights based on the groups. Maybe we could then assign labels or give a more elaborate description to the groups given the knowledge that we found.

To formalize the idea above:

A simple measure of distance is the euclidean norm defined as:

Now the way that the chapter shows how to assign these \(k\) groups is through k-means algorithm. The best description for k-means is encapsulated in three steps:

I put the image of Ouroboros above as a graphical analogy, because k-means is self-contain and also iterative, steps 2 and 3 repeats. In each iteration a new assignation of clusters are given and then a redefinition of group representatives. But, opposite to the symbolic meaning of Ouroboros, the flow of time is not endless. The process of repetition ends when the algorithm converge to a solution.

When k-means reach a solution? The algorithm convergence occurs when there isn’t a variation in the group assignation with the previous iteration (\(c_t\) is exactly the same that \(c_{t-1}\)).

The implementation of the three previous steps is very straightforward using numpy in python.

A good idea to understand k-means is visually and step by step! So I wrote k_means with the argument num_iter that enables to stop the process in a certain iteration and get the results at that point.

We can play with the algorithm and show the evolution of centroid definition and cluster assignation, but before that we need some data. We generate two groups of random data \(D\in R^2\) from two bivariate normal distributions with the following parameters:

A simple data with 2 features helps us to visualize easily. Aditionally we know a priori that are two underlying groups, these are defined by the two different distributions and, if we take a look to the next plot, the two samples from these distributions are very well separated. Of course this is a very basic setting but the purpose is to ilustrate how k_means works. 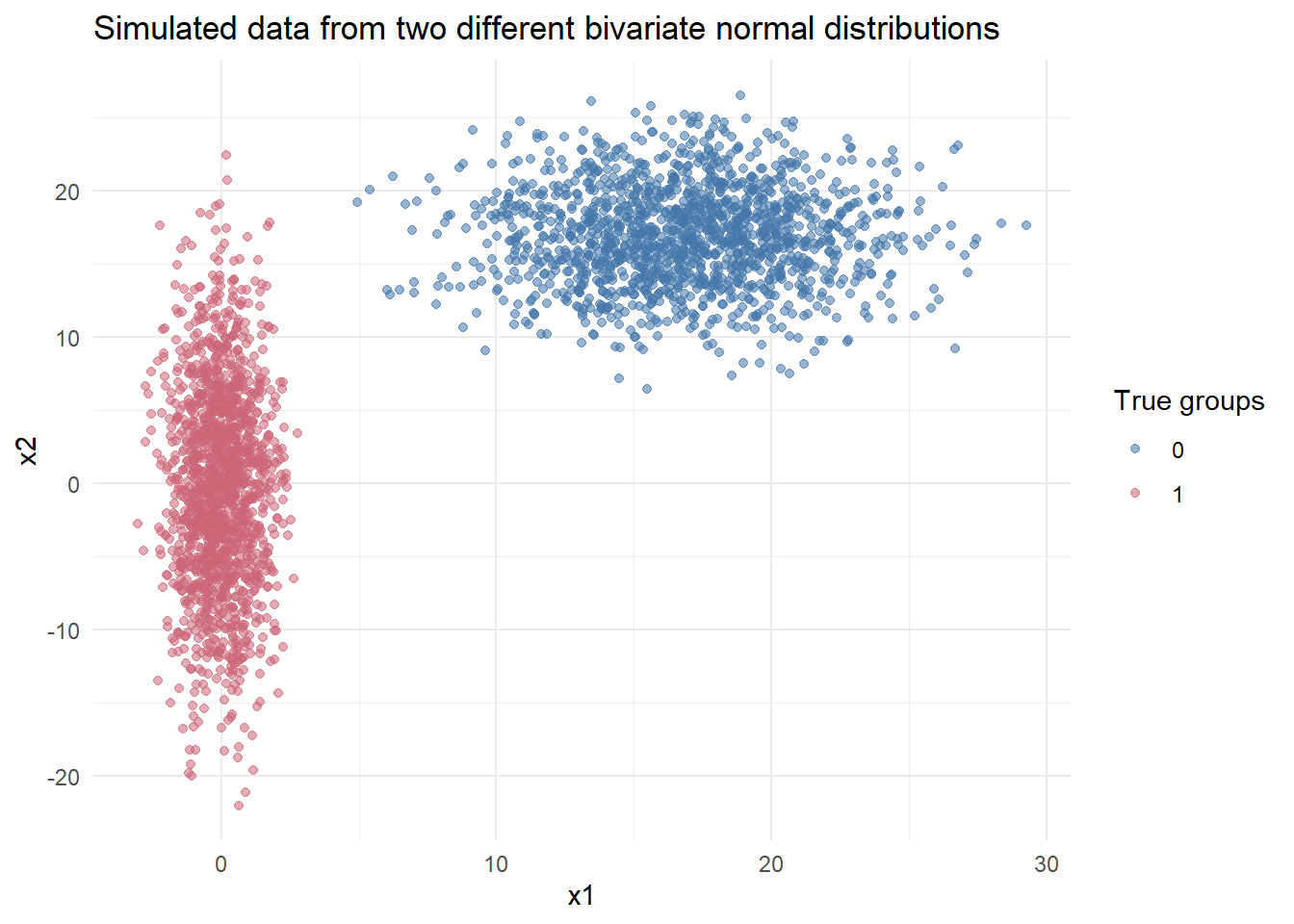 So k_means is blind to the colours and his goal is undercover the samples generated from the two underlying distributions based on data. Pictorically the process is as follows:

For the cost side, \(J\) decay rapidly and converge around a cost value of 36. 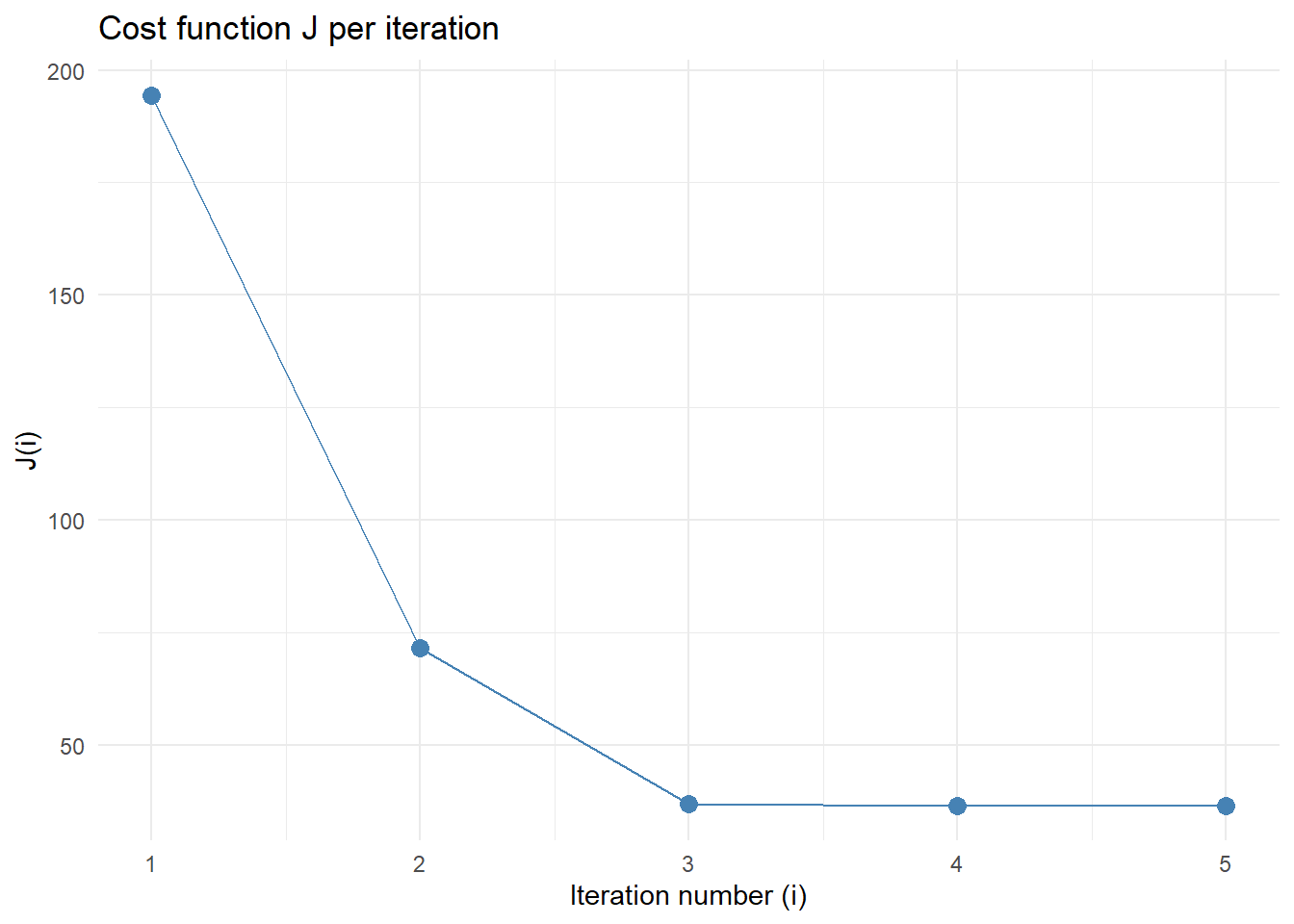